There are numerous arthropods in Texas that are occasionally mistaken for insect pests. Few insecticides are registered for the control of non-insect arthropods, and few of these creatures are considered to be Pillbugs or rolie-polies are land-living (terrestrial) isopods. However, like their marine relatives, they breath with gills, and require high humidity for respiration.

pestiferous. Sowbugs and pillbugs (Isopoda) are considered to be pests of gardens and ornamentals.  Identification of these creatures and an understanding of why they occur in the landscape is the best method for coping with situations in which their occurrence would otherwise be considered a nuisance. Cultural methods, such as removing piles of dead leaves and decomposing organic matter, and removing or disturbing landscape timbers and other debris where these critters hide during the daylight hours will help reduce their numbers locally.

Amphipods are crustaceans related to pillbugs (Isopoda) and shrimp. They normally live in association with salt and fresh water, where they scavenge for food on decaying organic material such as dead and decomposing leaves.

An enormous variety of species occur in or near the ocean, where they live under rocks, debris and in sand where there is plenty of moisture. These amphipods have been called “beach fleas”. These amphipods are variable in color and crawl or hop actively. They have long antennae and many pairs of legs, with two long forked appendages sticking out the back ends of their bodies. These species generally cause no problems or concerns in urban environments. A terrestrial species from Australia rarely can be found in greenhouses and gardens. In fresh water, high populations of fresh-water amphipods can build up in temporary pools and puddles. After rainy periods have ended and these temporary habitats dry up, these amphipods hop about in mass searching for another body of water and often invade nearby homes and other structures where their presence is considered to be a nuisance. Because of their ability to hop, they have been confused with fleas and spring tails (Collembola), but they are commonly called “scud.” The most common species is Hyalella azteca.

Scuds are shrimp-like in color and have many pairs of legs along the entire length of their bodies, including a pair of forked appendages at the end of their bodies. Their bodies are tall and skinny rather than flattened and wide as are pillbugs and sowbugs, and they have many nearly equal segments. They are harmless and do not bite.

There are no pesticides registered for use to control Amphipoda that have left their aquatic breeding sites, although they have been reported to respond to some contact insecticides applied to infested areas. They will quickly die naturally if they can find no water, and this phenomenon may have actually been the reason for amphipod death where success with insecticide use has been reported. Birds will actively eat stranded scud if present.

In areas with a history of amphipod invasions, cultural practices are recommended for preventing future migrations over land. Improving drainage patterns in the vicinity of structures to prevent bodies of water from forming temporarily during rainy periods will prevent populations from developing. This practice will also reduce mosquito breeding areas. When and if invasions of amphipods do occur, keep doors shut and seal other sites where scud can enter the structures until migration stops. Isopoda, ‘sea roach’ 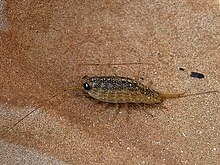 Along the Texas coast line, particularly among rock jetties, an arthropod named Ligia exotica, can be seen scurrying across the rocks and around tidal pools, particularly in the evening. This creature superficially resembles a cockroach and has been commonly called the “sea roach.” Like the cockroach, this arthropod is a scavenger. Populations of sea roaches eat tons of beach debris, including decaying plants, algae, dead fish and carrion, and thus are considered to be beneficial organisms. They are harmless to humans and provide food for seagulls. Although sea roaches bear gills, they are terrestrial and will drown.